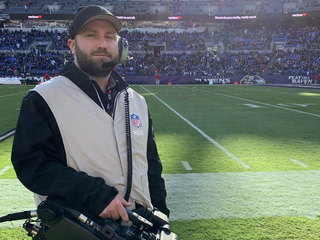 The Division of Information Technology (DoIT) is pleased to announce that Dustin Roddy has been named manager of its New Media Studio (NMS). A 2014 graduate of the Media & Communications Studies (MCS) & American Studies programs, Roddy brings a rare combination of technical expertise as a video producer as well as excellent people and customer service skills.

In addition to daily responsibilities managing the Studio, Dustin played a key role in the successful partnership between DoIT, Athletics and Media Communication Studies to lead UMBC's live streaming of men's and women's basketball on ESPN3 that was featured in UMBC Magazine. He also worked with VPC Communications, owned by '86 Alum Eli Eisenberg, to oversee the Studio's upgrade to high definition (HD) broadcast quality production facilities, which supports numerous MCS student interns hired by Athletics to air 30+ ESPN3 broadcasts each year.

Dustin’s good working relationships were invaluable during and after UMBC's historic upset of #1 seed UVA in the 2018 NCAA Men's Basketball Tournament. Late that evening and all during the next two days, as the spotlight shone brightly on UMBC, Dustin helped educate the CBS "futures" producer who was only assigned the next day. She literally knew nothing about UMBC, so Dustin was feeding her information, web links and video archive footage with little more than a moment's notice. Eventually, Dustin’s in-game and behind-the-scenes footage was also on display in the CBS Sports retrospective, “Four Sides of the Story,” that aired this past fall.

In addition to working for UMBC, Dustin is an accomplished videographer, producer and photographer who has worked freelance broadcasts for the Golf Channel, ESPN and Terra Firma productions in Philadelphia. Dustin also enjoys mentoring students who have gone on to work with local TV stations as well as the Baltimore Ravens and Orioles. He will also help mentor aspiring YouTubers during the 2019 Summer Enrichment Academy (SEA), and he is working with DoIT’s instructional technology team to develop and award a series of video production related “badges” for key skills and competencies.
Tags: instructional-technology success
0 Comments (requires login)